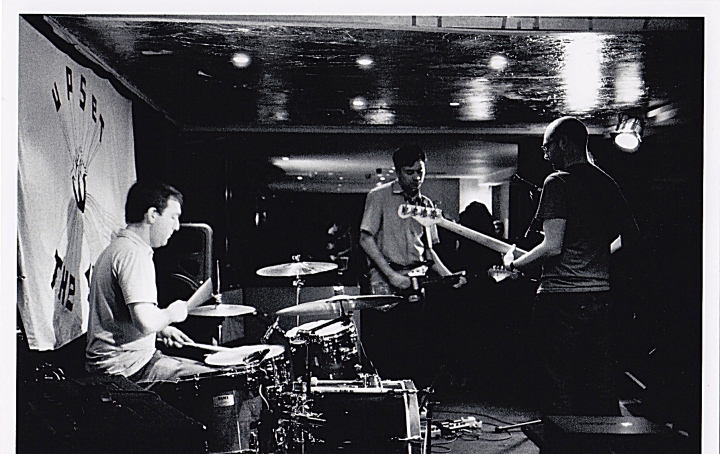 Fighting Kites were an acclaimed instrumental rock band hailing from North London that were active from 2006 to 2012. Seven years post-breakup, they’ve released their new compilation ‘Mustard After Dinner – An Anthology of Fighting Kites’ on Audio Antihero. We spoke to founding member Neil Debnam about the compilation, the band’s history, influences, life in Tokyo, current projects from Fighting Kites alumni, and more.

COUNTERZINE: How are you today?

Neil Debnam: I’m hot as I now live in Tokyo and it’s too hot for me for about three quarters of the year, but it is the weekend, so I’m also fine and dandy! Thanks for asking.

CZ: Tell us a little about Fighting Kites.

ND: Fighting Kites were a band that started as duo, grew to a trio and ended up a quartet. I’d say that our musical interests were quite wide-ranging but had some common ground and this is where our music as Fighting Kites started from. It then bloomed in four different directions simultaneously, hopefully resulting in something that was a bit different from the many instrumental ‘post-rock’ bands that were around at the time. I think we were quite poppy at times, a little surf-y and occasionally a bit noisy, expressing all of these without resorting to the use of words or singing. Probably because none of us wanted to sing.

CZ: The Fighting Kites project ended in 2012, but now in 2019, you’re releasing Mustard After Dinner – An Anthology of Fighting Kites, which compiles much of your past material. After seven years, what inspired this release now?

ND: It’s all down to Jamie at Audio Antihero who is currently tying up some loose ends with the various acts that have featured on his label. As we released an EP on there and did quite a few compilation and one off tracks for him which turned out pretty nicely he suggested lumping them all together in one mega collection. A lot of these songs have probably sunken into obscurity a little so I think we all thought it would be nice to give them a day or two in the sun.

CZ: Could you give us a brief overview of the material compiled for this release and where it came from?

ND: So first of all we have our debut self-titled, self-released, self-assembled, home recorded EP which was when the band was just Dan and me (Neil). Then we jump to the quartet days with a Resonance FM live session, a couple of songs made for Audio Antihero charity compilations and a Christmas song with Benjamin Shaw being the bread and The Vlaams Tapes being the filling of the four piece sandwich. The Vlaams Tapes was a CD-R we made for a Belgian festival appearance, loosely based on the concept of the Faust Tapes, made up of some ‘improvised jams’, some live songs, some farting around and one super layered and well recorded song. I don’t mean to give either the bread or the filling of the sandwich more significance. Without either you don’t have a sandwich, do you?

CZ: What and who would you say are some of your foremost musical influences?

ND: If you asked each of us you’d probably get totally different answers. If I had to mix them all up into an influence stew I’d put some krautrock, The Shadows indirectly (I don’t think any of us particularly like them, but there seems to be some common ground), partly through the Shadow Music of Thailand compilation (the possible meaning of the name of which has only just become clear to me when putting those two influences together!), a bit of Tortoise, maybe some jazz, some prog-rock from Luke, some Sonic Youth in my guitar parts possibly and I guess some desire to make it a bit tuneful that I guess comes from listening to a lot of indie when it was still interesting. Lots of food references in these answers. I think I’m hungry.

CZ: Fighting Kites formed in 2006 and had a healthy six year run, but you didn’t release your one and only studio LP until the very end of it. What ultimately led you to decide to end it then?

ND: Life! Bizarrely both Luke and I were leaving London, him for Edinburgh and me for Tokyo and if I remember rightly we announced these things almost simultaneously. There probably was also a bit of a feeling of us finally achieving our goal by releasing the album. If we hadn’t been moving, I expect we would have carried on, but it seemed like nice timing to make the album the pinnacle. Perhaps not so nice to the label who had to promote an album by a defunct band. Sorry about that…

CZ: If you had to pick a favorite track from the Fighting Kites catalog, what would they be?

ND: For me, I think it would have to be something from the split EP with Broken Shoulder. I think this was us at the height of our powers, where everything came together perfectly. Could be any of them, but if you’re pushing me for one, I’ll say “Cat is Egg”. Unhelpfully for this conversation and compilation, the original isn’t included, but the Resonance session version is and that’s a pretty good rendition with extra added tension and fluffs for added realism.

CZ: What’s your favorite memory from back when Fighting Kites were active and gigging?

ND: The Belgian festival show was a great experience, although the actual playing part wasn’t that good. I really enjoyed our farewell show too, when we were able to do a ‘greatest hits’ in kind of chronological order and were indulged by the audience. The gigs we played at Spatchcock were also great. It was really fun to feel part of an exciting underground scene. Bizarrely though, given my personal  distaste for dressing up and gimmicks, a May Day show we did at the Salisbury in North London dressed as Morris Dancers will always stick in the mind. Can’t remember if it was our best gig ever, but it was surprisingly fun. I believe the live recording of “Grey Starling” on this compilation is from that show, so you can judge for yourself!

CZ: There are several instances of prominent benefit releases across Fighting Kites history, including the “Bob Hope would​.​” compilation, the ‘Some​.​Alternate​.​Universe’ comp, the “This Christmas (I Just Want to be Left Alone)” re-issue to raise money for Shelter, as well as its inclusion on an Unwashed Territories compilation to raise money and awareness for Pussy Riot. How much weight do you put on this aspect of Fighting Kites legacy, and how do benefits and charity work still play a role in your lives today?

ND: I think we have to give all of the credit for this to Jamie from Audio Antihero. Of course, I’m sure we all are delighted if we can do something that contributes in any way to a good cause, but Jamie should get the praise. Nice one Jamie! Although I should also mention that Luke’s current job is in this kind of field, so I guess his future employment had a prescient influence on our philanthropic or charitable efforts.

CZ: Who are some of your favorite artists and bands today?

ND: I’ll have to give you a wholly unrepresentative point of view of one quarter of the band. I still try to listen to lots of new music but have recently found myself very much enjoying the music of my late teens and early 20’s which was US guitar music, kind of post-hardcore stuff. The main reason for this is probably that I’ve been listening to a lot of drone in the last few years and whilst I love both types of music equally, it’s easy to get stuck in a drone furrow and struggle to motivate myself to move from a prone position. So I need a bit of noise to get me up and running sometimes. Over here in Japan, I’m still looking for my latest dream band, who are putting a new twist on that 90’s guitar thing. I need to look a bit harder I think. Some of my favorite Japanese acts are ASUNA, Sonotanotanpenz, and a recent favorite is Geeker-Natsumi, but these are all quite different from Fighting Kites. I’m keeping my eyes peeled for anything and everything interesting though.

CZ: What are you all up to these days? What are your new projects? Anything on the horizon?

ND: I am still doing my solo project Broken Shoulder which I started when we were still doing Fighting Kites. I’m also running a tiny label here in Tokyo called Kirigirisu Recordings. This year I have been lazy on both fronts though, so hopefully this here will give me a kick up the backside. Luke and I were discussing doing something together without actually being in the same place. I’d like to get that idea up and running. He has recently recorded an EP in a new project called Scorp and currently runs the Gorgie Go-Getters – a 17-piece band for adults with learning disabilities. Dan and Dave were in The Drink for a while but I think they are on hiatus at the moment. Dave is now playing with another Drink member in her new band the Gravediggers. Dan recently wrote string and horn arrangements and played on the forthcoming album The World Is a Bell by The Leaf Library, which is out later in the year. He also says he spends a lot of time playing the saxophone and/or making drones in fairly unfocused fashion. Clearly we are all about the take the music world by storm!

CZ: If Fighting Kites could be remembered for one thing, what would you want it to be?

ND: Yikes, that’s a difficult question. Hopefully people enjoyed the music and the gigs. I think the on-stage ‘banter’ is 100% not the correct answer to this question. I’m going to cop out slightly and mention again the split release with Broken Shoulder (last few CD copies left apparently). Everything fell into place for this release and the video Luke made for “Wojtek the Bear” is still pretty great I think so that’s a good a memorial as I can think of.